I don’t even remember when first I got my Fitbit. I’ve had one for so long now that it had become part of my DNA. The benefits of using a fitness tracker, whichever brand you prefer, can be many. Research has shown that people who use a fitness tracker are more motivated to be active to reach their goals. Looking at specifics such as how many steps you’ve taken, or how many hours of sleep you had, or calories burned during a workout are great motivators for many to keep those numbers high. And let me tell you, I was not different… until recently.

When the new year began I decided to change things in my life. I am going through a detox of some sort of many things actually. The first thing on the list was social media. I found myself spending too much time in social media and I knew I needed to change that. The second thing on the list was to stop wearing my Fitbit. I will explain more on that shortly. The third thing on the list was not a removal but rather an addition of spiritual awareness. I know we are only two+ weeks into the year, but I think that not wearing a fitness tracker has made a difference much bigger than I anticipated, which is why I decided to share about that first.

Like I mentioned at the beginning, I’ve had a Fitbit for a while now. Shortly after the Fitbit Flex was released in 2013, I got one. I was excited to track my steps and I started with the suggested goal of 10K steps per day because you know that’s what is recommended by the CDC to have about 150 minutes of activity during the week when broken into 30 mins/day at least 5 days/week. I was so determined to reach my goal. I had a desk job so I would consciously make an effort to walk more to reach my daily goal. I started going to the restroom that was the farthest away, and taking the stairs from the BART platform all the way to the street, and overall I started to walk more. Most days it was no problem to reach 10K so I moved my goal to 15K and I was able to reach it every day by just being more active.

And with app updates and new trackers more perks came with it. Things like tracking hours of sleep/rest, and calories burned during a workout: I was in heaven! I am a fitness enthusiast and as I have struggled with weight loss for so many years, these seemed to help me a lot. When the stars lined up and I was able to arrange my schedule to include a good 45-60 minutes for a workout most days and I started to prep my meals, the weight started to come off, like wha?! I was excited to see all my numbers and know where to modify to reach my goals. HOWEVER, there were a few things that I noticed were not right. And while this good run got interrupted by pregnancy #3, those negative things are obvious to me again which made me consider removing my tracker for a while. What am I talking about you say? Well, how strongly you feel about these memes? 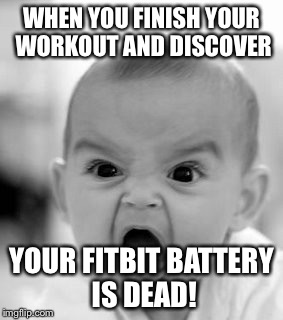 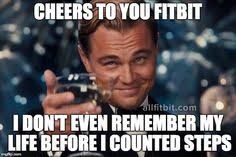 Nailed it! It kinda feels like you can’t give a step unless you have your Fitbit on AND is charged, duh! And there was one other thing that is a problem with many wrist fitness trackers when your steps are not counted if you are pushing something say a stroller while waking baby bear or the shopping cart at the store… what?!

That’s right! If you are not swinging your arms steps are not always counted which sucks. And on that note, I’ve had… a lil problem with my tracker thinking that I am walking when all I am doing is having a conversation and apparently I swing my arms a lot when I talk because while sitting during a 1-hour 1:1 meeting with my mentor it would think I had like 10 minutes of activity and that was just me being a bit too expressive… yiaiks!

It is clear to me that being active is AMAZING but it shouldn’t be so dependent to Fitbit Challenges or goals. I am consciously being active. I take the stairs. I have a workout schedule that combines weight training with cardio. I jog on Saturdays. I take the kids for walks on weekends and weeknights (when the weather is good). I aim for at least 7 hours of sleep. I drink an ok amount of water. I’m conscious of what goes into my plate especially when eating out. I don’t like pushing the stroller with just one hand so my other arm can swing when I walk or jog with the baby for my steps to be tracked. I don’t like feeling like I can’t workout if I forgot my tracker on the charger because now I don’t know how many calories I’m burning. This post is not to badmouth Fitbit which is actually not the only tracker I’ve tried. It’s about the pressure I created for myself while using a fitness tracker. Using a tracker is a great way to be active especially when you are new to the game and if you are not like me and you don’t allow it control you then that is great! But me… I had to take a break. And I feel good because all the good behaviors are now part of me except I don’t have the pressure of a goal not met. I have not a single doubt that I am still doing all the good things to a healthier me.

One thought on “Fitness Tracker Free!”

Find me on social!